ANOTHER DAY ON THE ROAD 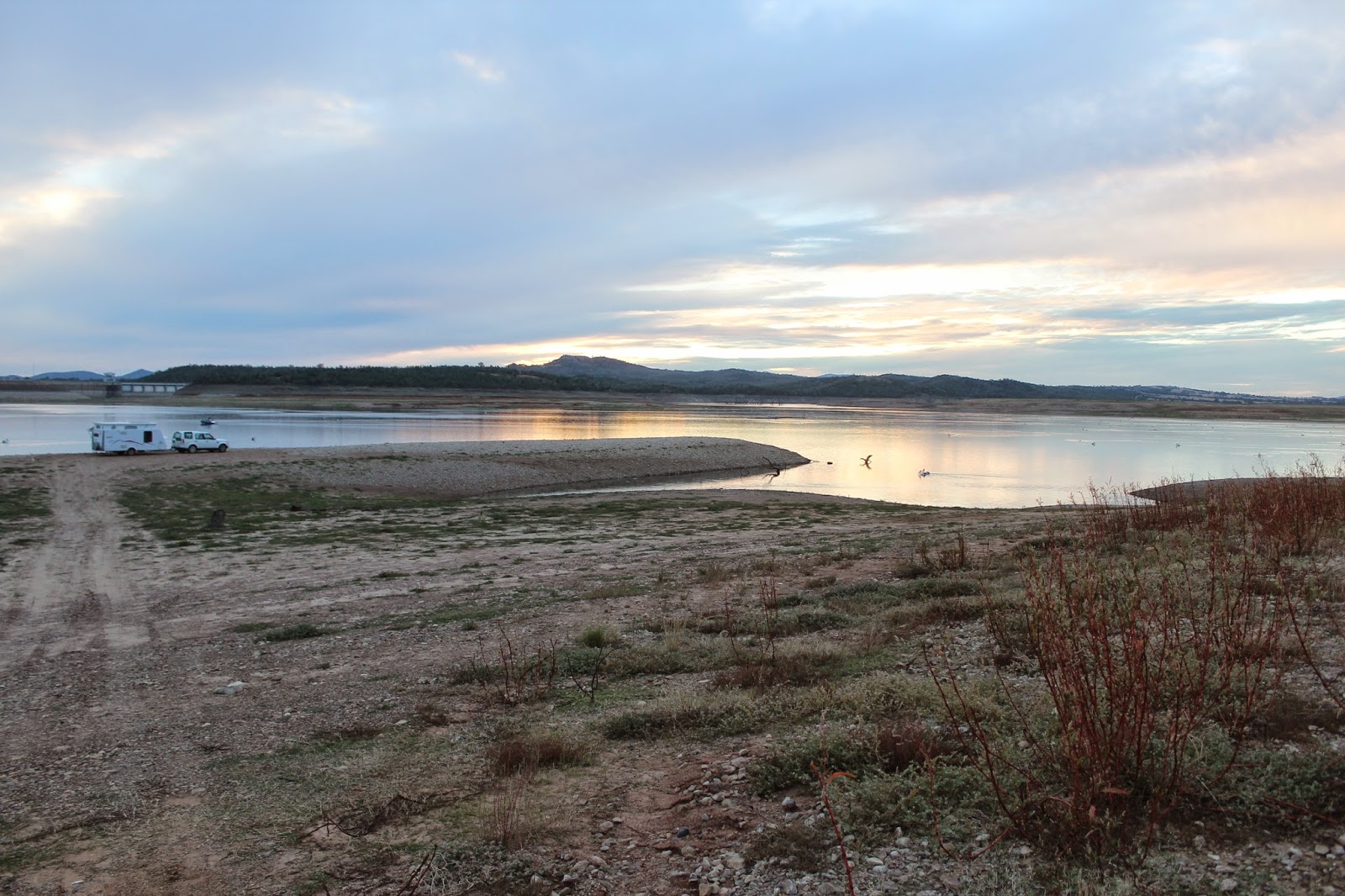 Another 700kms today. I wasn't going to do a blog but we are camped in such an extraordinary place that I thought I should.


We are on the shores of Lake Keepit 30kms east of Gunnedah in the bush camping section of a State Park. The lake exists because of the Keepit Dam. Apparently when full, it holds two thirds the capacity of Sydney Harbour although it is quite low at the moment. We saw it on the map and its location happened to coincide with time to stop driving.


Jenny, Craig, Hannah and Nathan are at Nambucca Heads 350 kms from here so we are going home via the coast and will spend tomorrow night with them and head back to the real world after a fabulous five weeks on Tuesday. 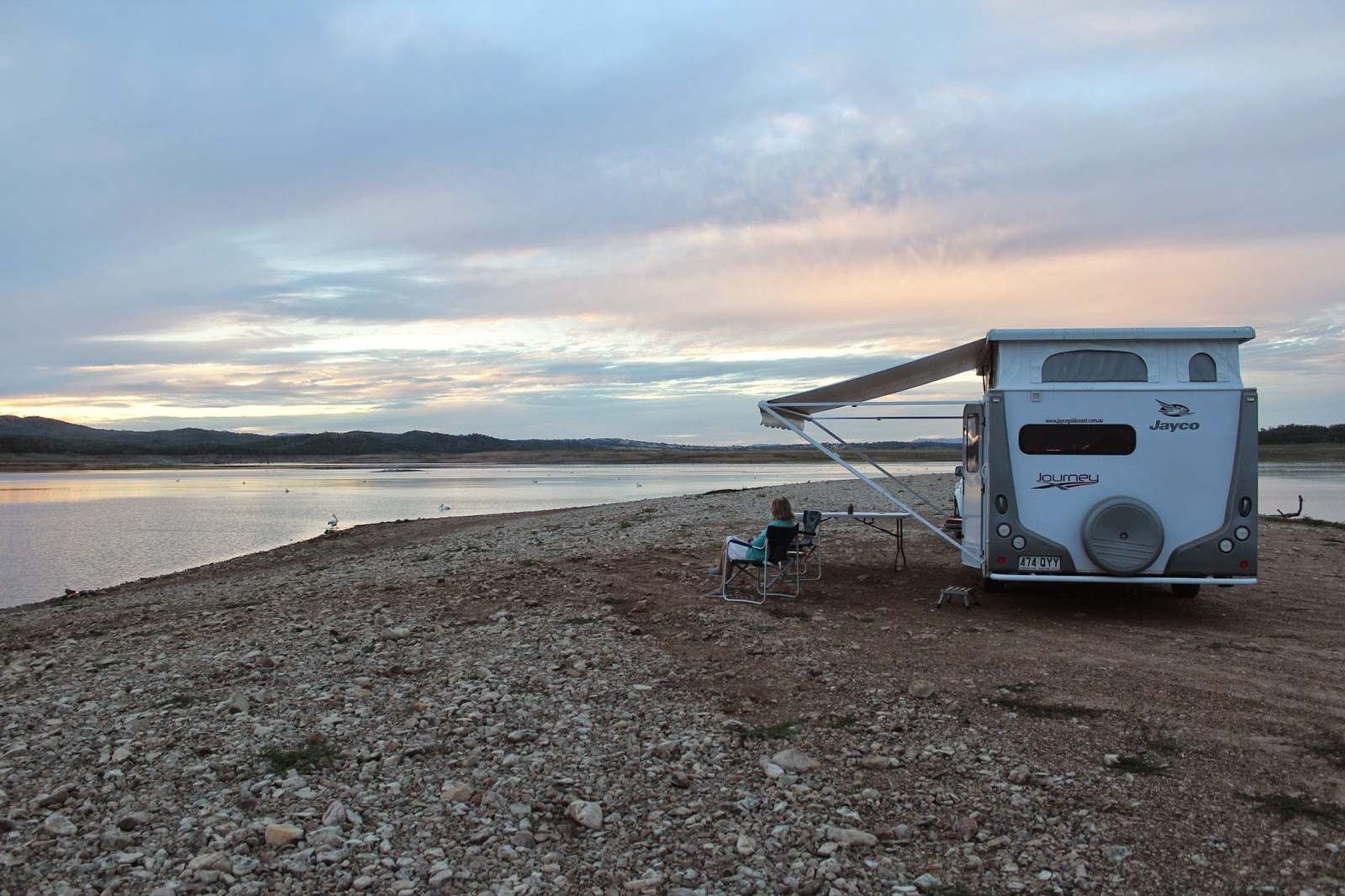 Posted by MichaelK at 01:07 No comments: 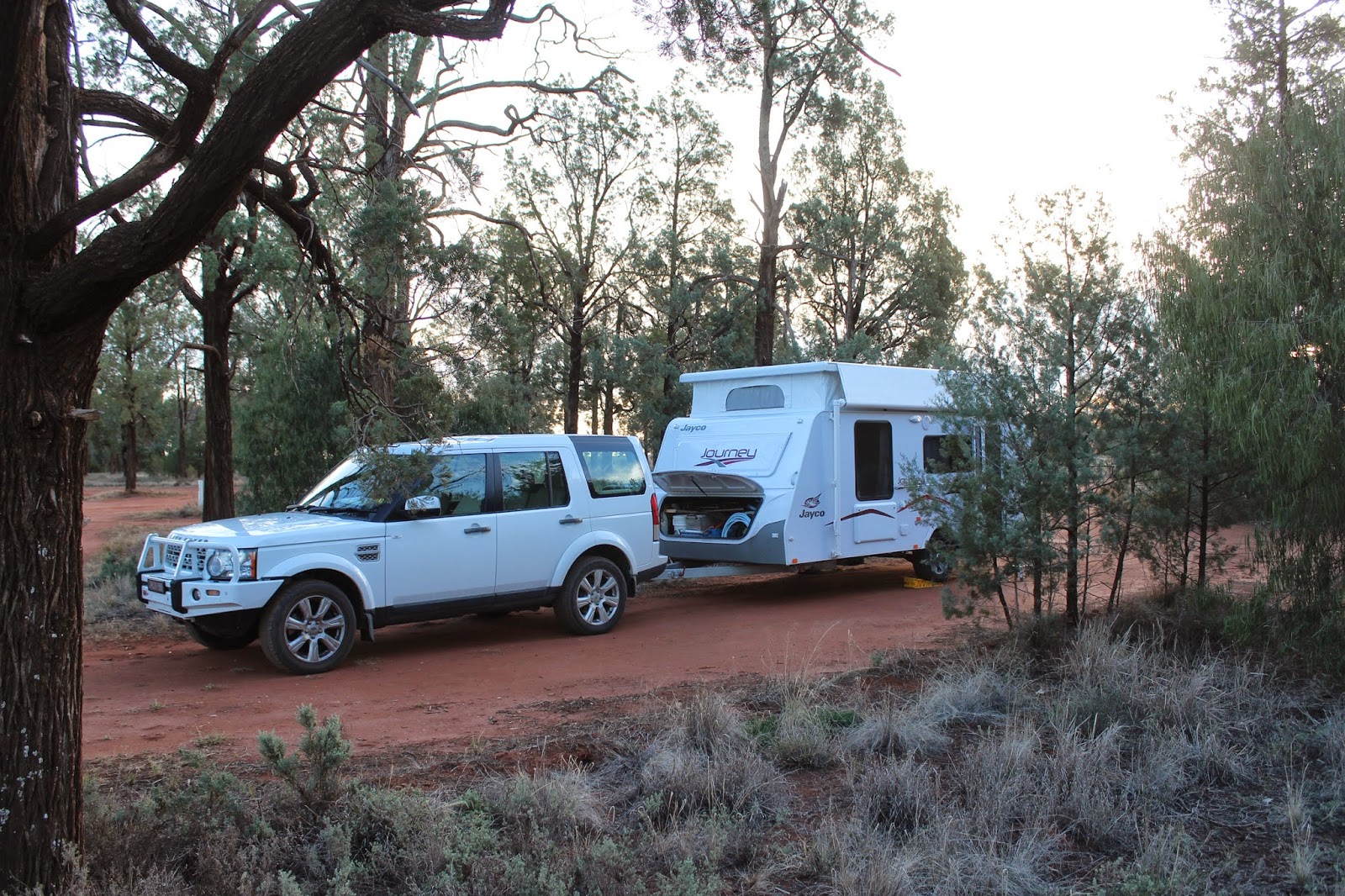 Sadly Lady Elliot Island didn't win any awards last night but it was a great honour to be a finalist and we had a very pleasant evening with the Gash family and the Carters.


We have had a very productive day today having driven about 750 kms to be camped back in the bush at a roadside stop near Goolgowi – between Hay and West Wyalong. Tomorrow will be another driving day, hopefully a similar distance.
Posted by MichaelK at 01:02 No comments:

THURSDAY – BACK TO ADELAIDE 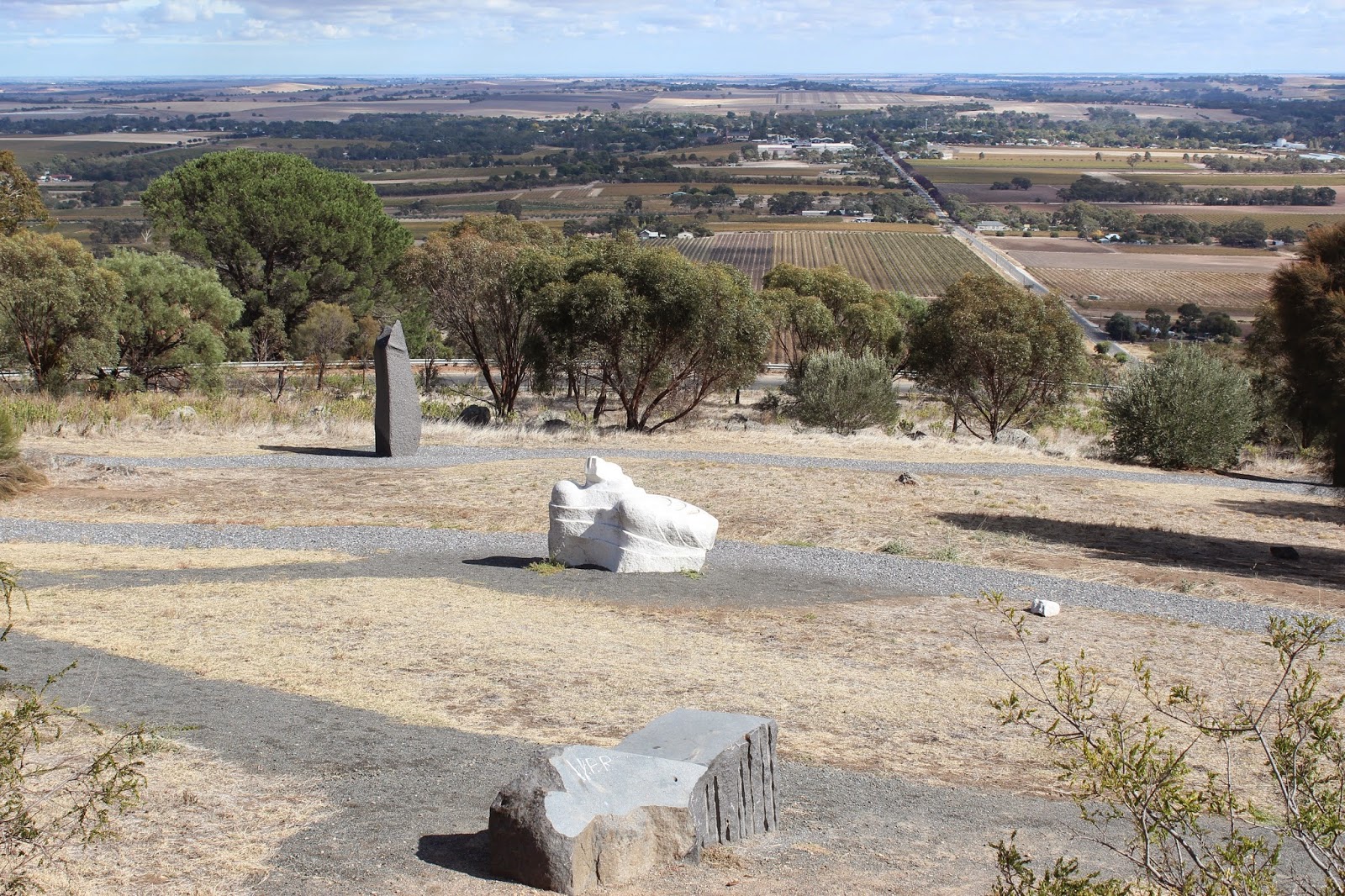 As you will have noticed, there was no blog last night following our very pleasant day doing a wine tour. We now have several dozen bottles to show for all the effort we put into tasting wines yesterday. It was very pleasant, not only from the wine tasting perspective, but also from the interest perspective in that we learnt a lot about the Barossa Valley and its wineries. It all looks very healthy although the media is talking about how the wine grape growers are struggling to cover costs. 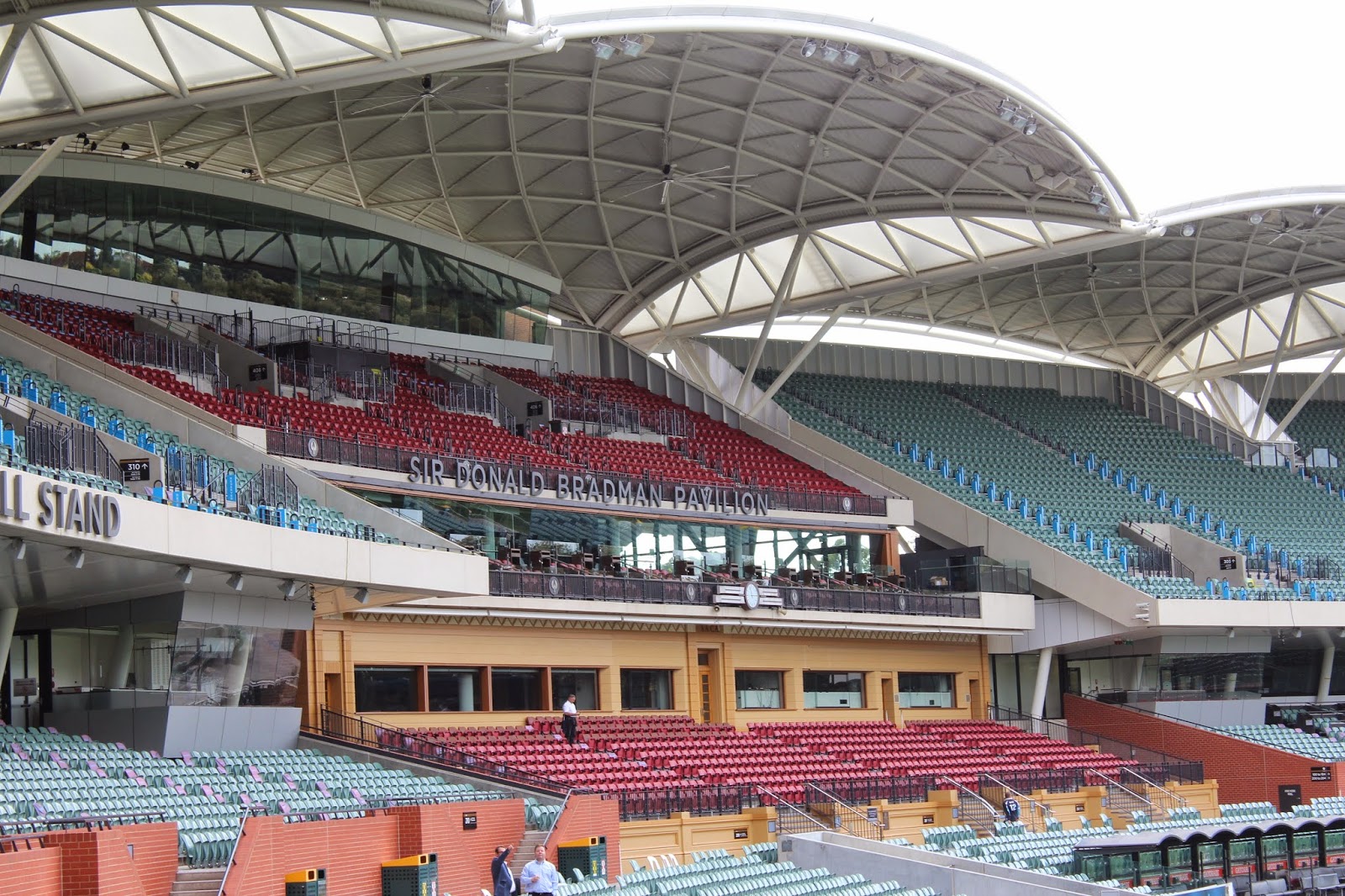 We have now returned to Adelaide, this time staying in the Adelaide Caravan Park on the Torrens very close to the city centre. We spent this afternoon walking the very pleasant paths along the river between here and the city, ending up having a quick look at the Adelaide Oval. 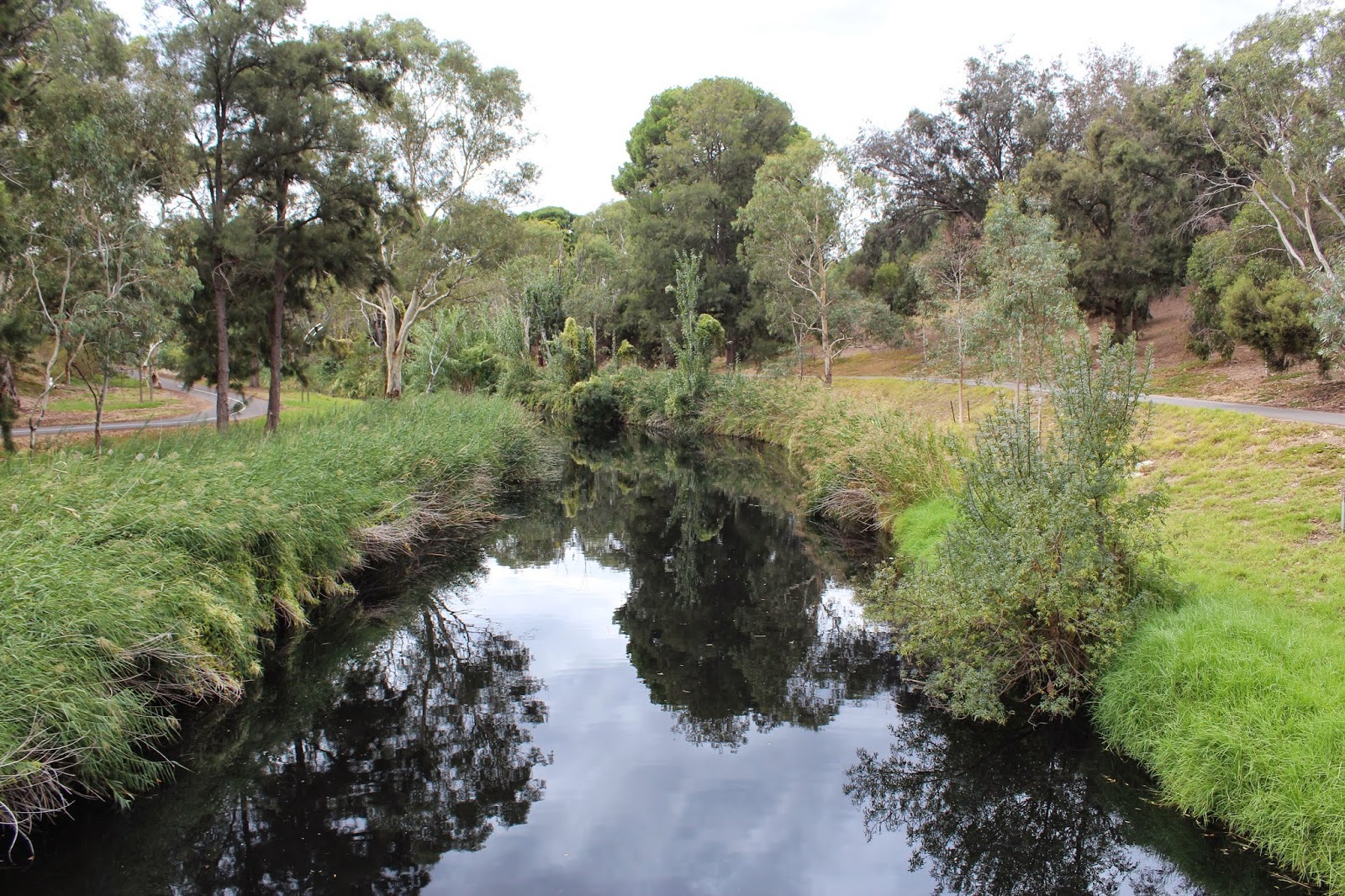 Where we are, the river is little more than a creek but there is a weir downstream of the city which enables the city reaches to be quite picturesque. When we were here for the golf, we saw where it would enter the sea if ever there was sufficient flow in it to get that far. At the moment, it is a sandbar. 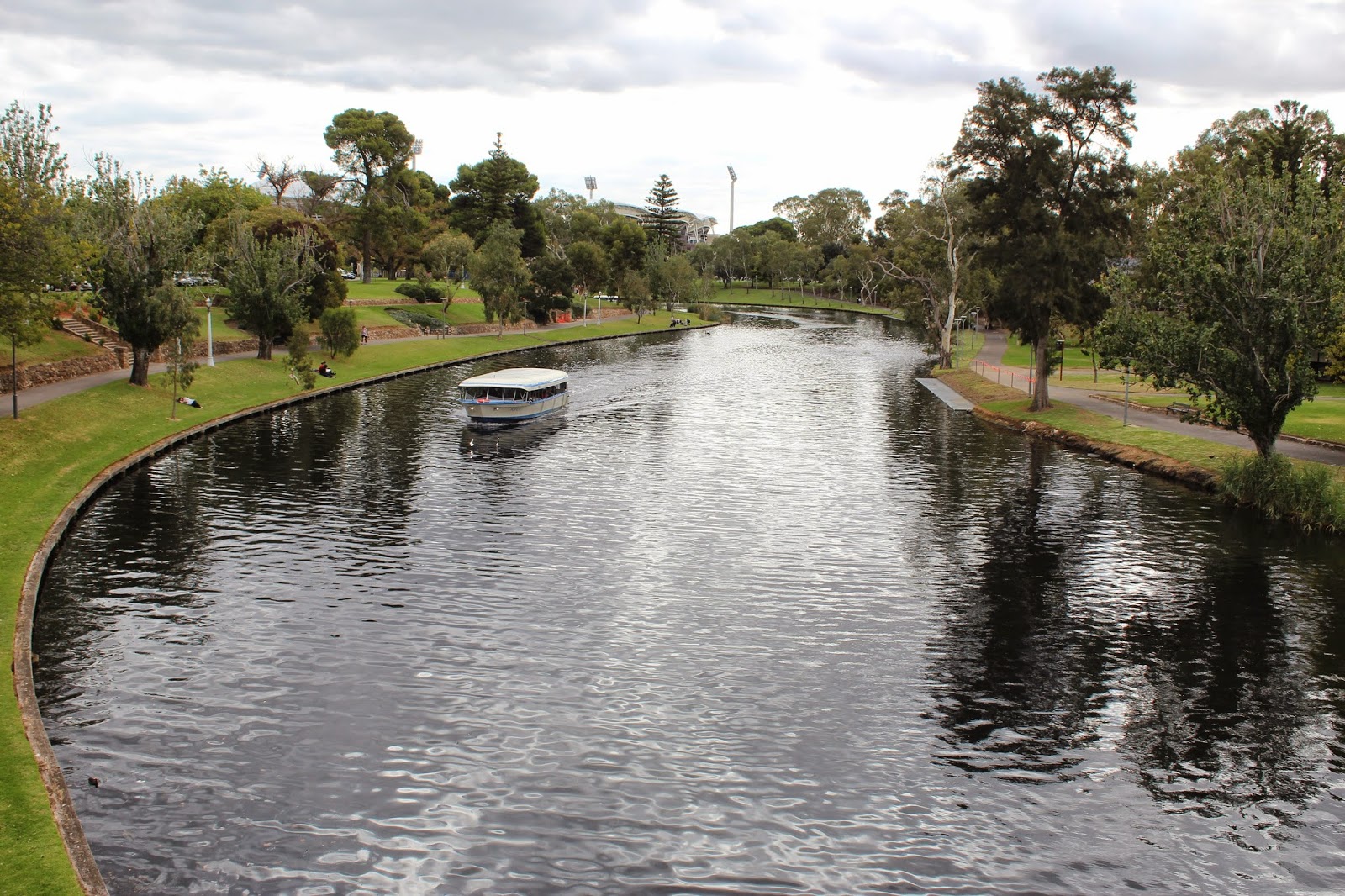 Posted by MichaelK at 01:44 No comments:

TUESDAY – THE END OF THE COASTAL COMPONENT OF THE TRIP


Nothing exciting to report today and no photographs worth sharing. We continued up the eastern coast of the Yorke Peninsula and are now at Nuriootpa in the Barossa Valley with a wine tour booked for tomorrow. Don't expect anything intelligent from us tomorrow night.


The weather has improved slightly in that the chilly wind has dropped and we haven't had any more rain but the temperature remained between 14 and 17 degrees all day and is apparently to drop to a minimum of 7 degrees tonight.


Arrangements have been confirmed for the function on Friday night so we are definitely on the last phase of a great trip.
Posted by MichaelK at 00:20 No comments:

MISERABLE MONDAY – ON THE MOVE

Today has been a perfect day for being indoors. The temperature briefly climbed to 17 degrees, we have had intermittent rain squalls and even some small hail and the wind is gusting to 30 knots. I have reversed my usual photo habit in that the photo above is the view from inside our warm dry van.


We have spent the day travelling about 150 kms to be at the Port Vincent Caravan Park on the east side of the peninsula. The only consolation about the wind is that it is coming from the west so the foreshore, along which we went for a long walk this afternoon between showers, is relatively calm. 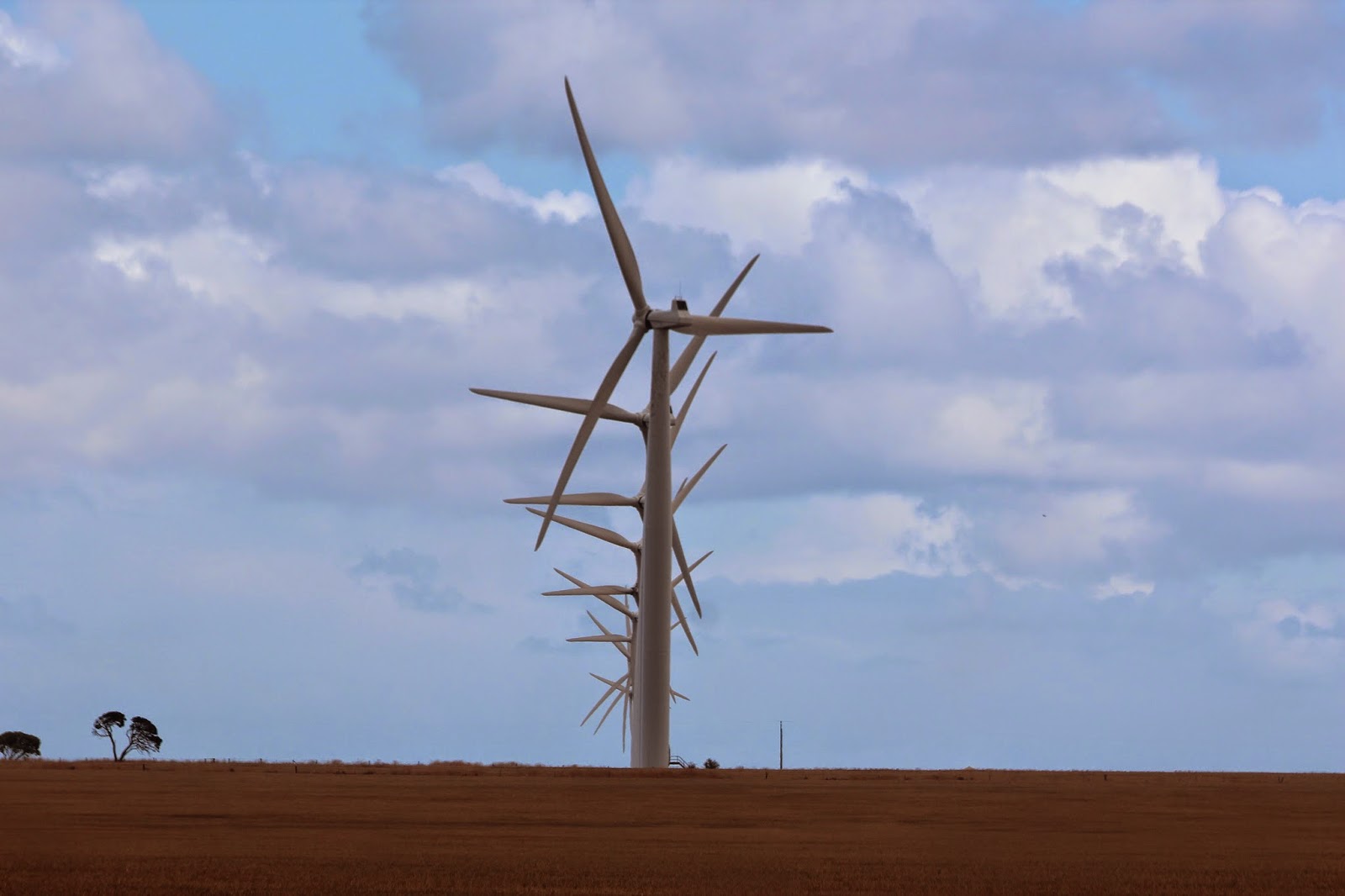 What the weather is good for is wind farms which are quite prolific in this area, the “windiest area in Australia”. 20% of South Australia's electricity is generated by wind turbines. 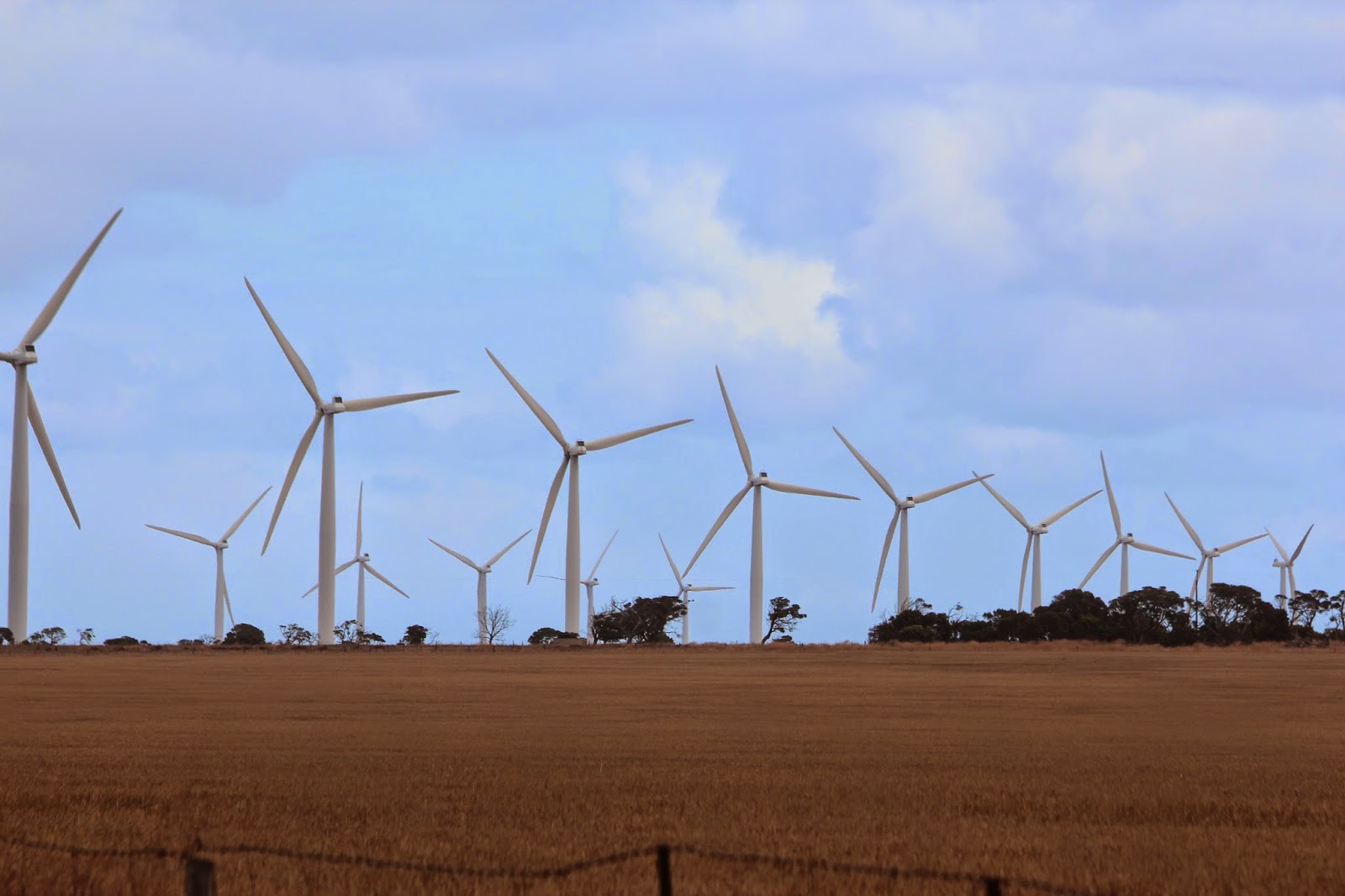 Tomorrow looks like being another ordinary day so we might need to resort to plan B – some wineries perhaps. It's good weather for them. Fortunately we were able to get some fish and prawns for tea so our white wine will be well supplemented.

Posted by MichaelK at 01:28 No comments: 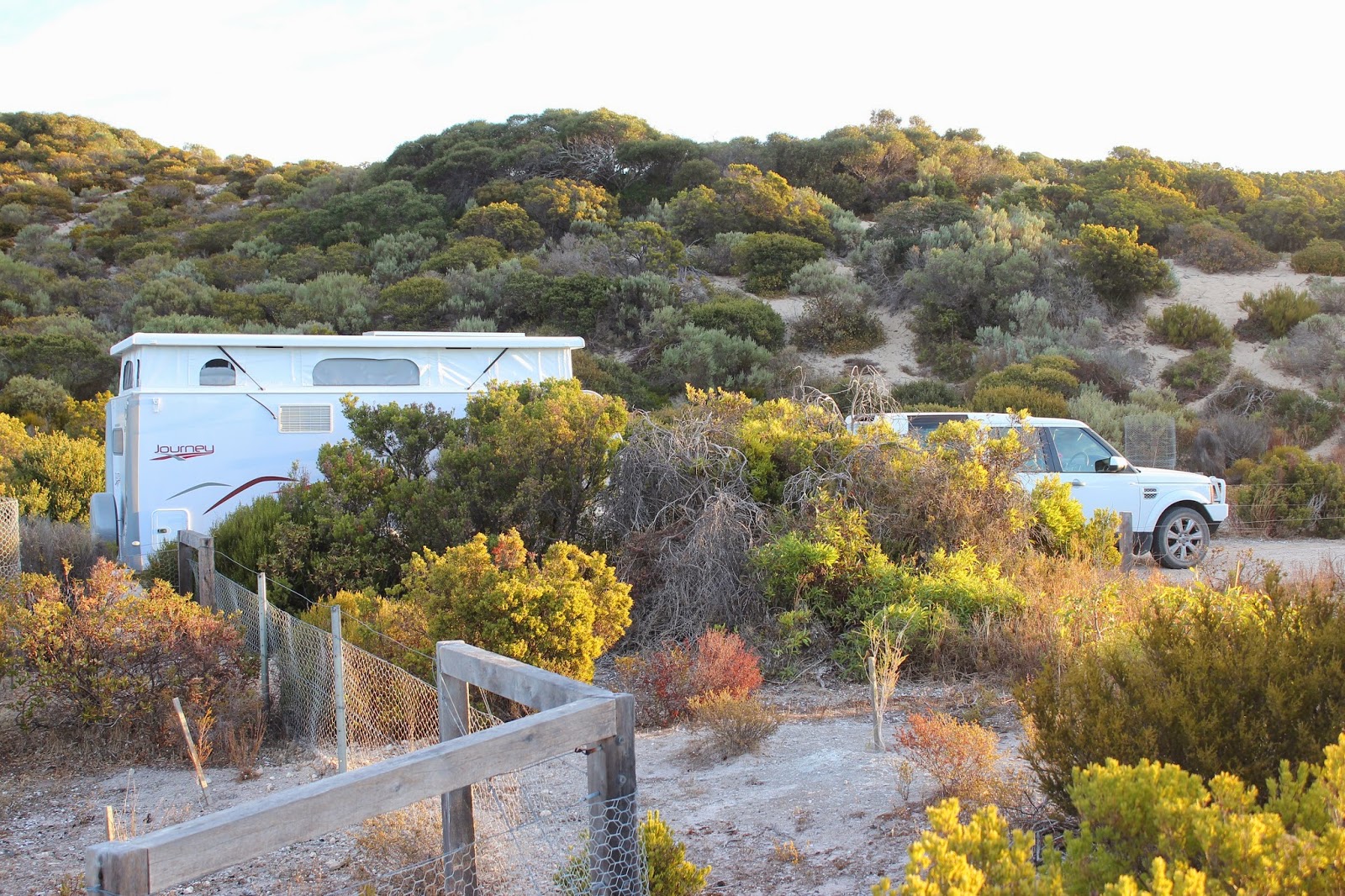 As you may have gathered, we had no signal at camp so this is one blog for Easter spent at Innes National Park at the foot of the Yorke Peninsula.


We camped in Caravan Site 3 in the Pondalowie Campground. The significance is that the park was fully booked and the Rangers dropped in soon after we arrived to check that we were the right people in the right site. We were. 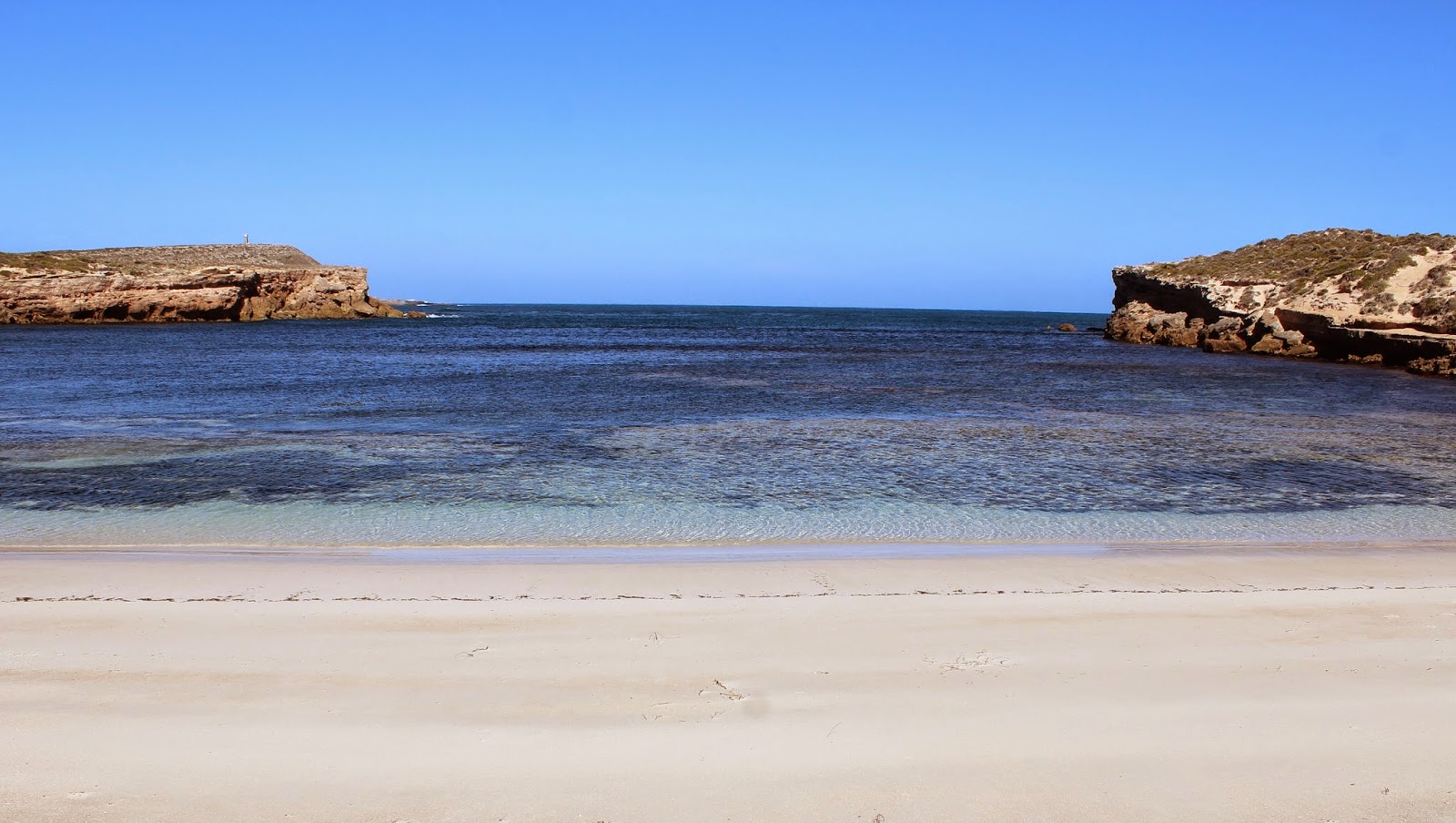 We were in walking distance of some spectacular bays although I gather that, to catch any fish, you have to have a boat and head out wide. The few people we saw fishing from the beach didn't catch anything. I came prepared for fishing but saw nothing to get excited about. 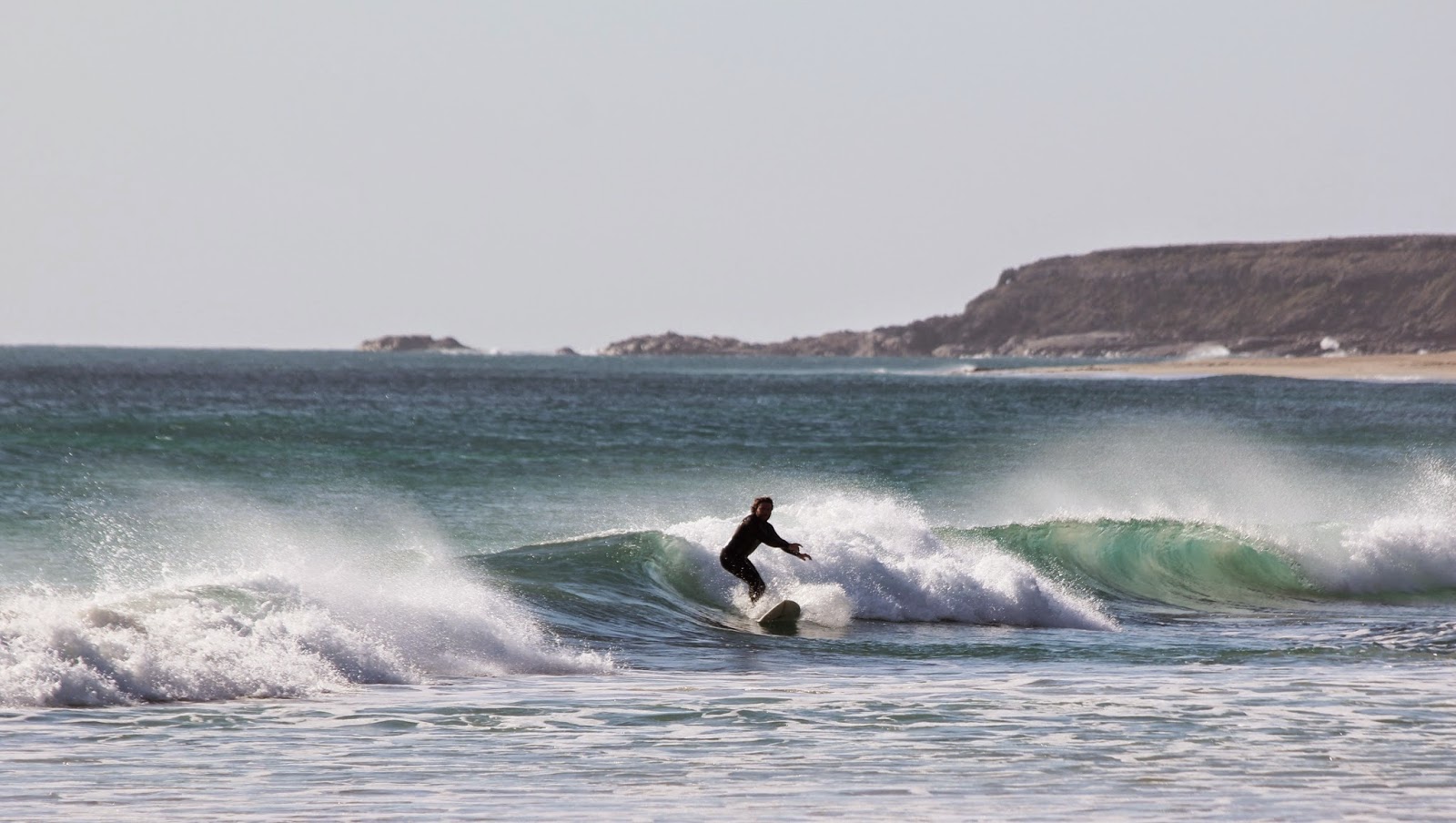 Not far from where we camped is the “Pondalowie Surf Break”. We saw several seals so I would expect that, apart from surfers in the water, there would also be some Great Whites. Hopefully the two won't meet. 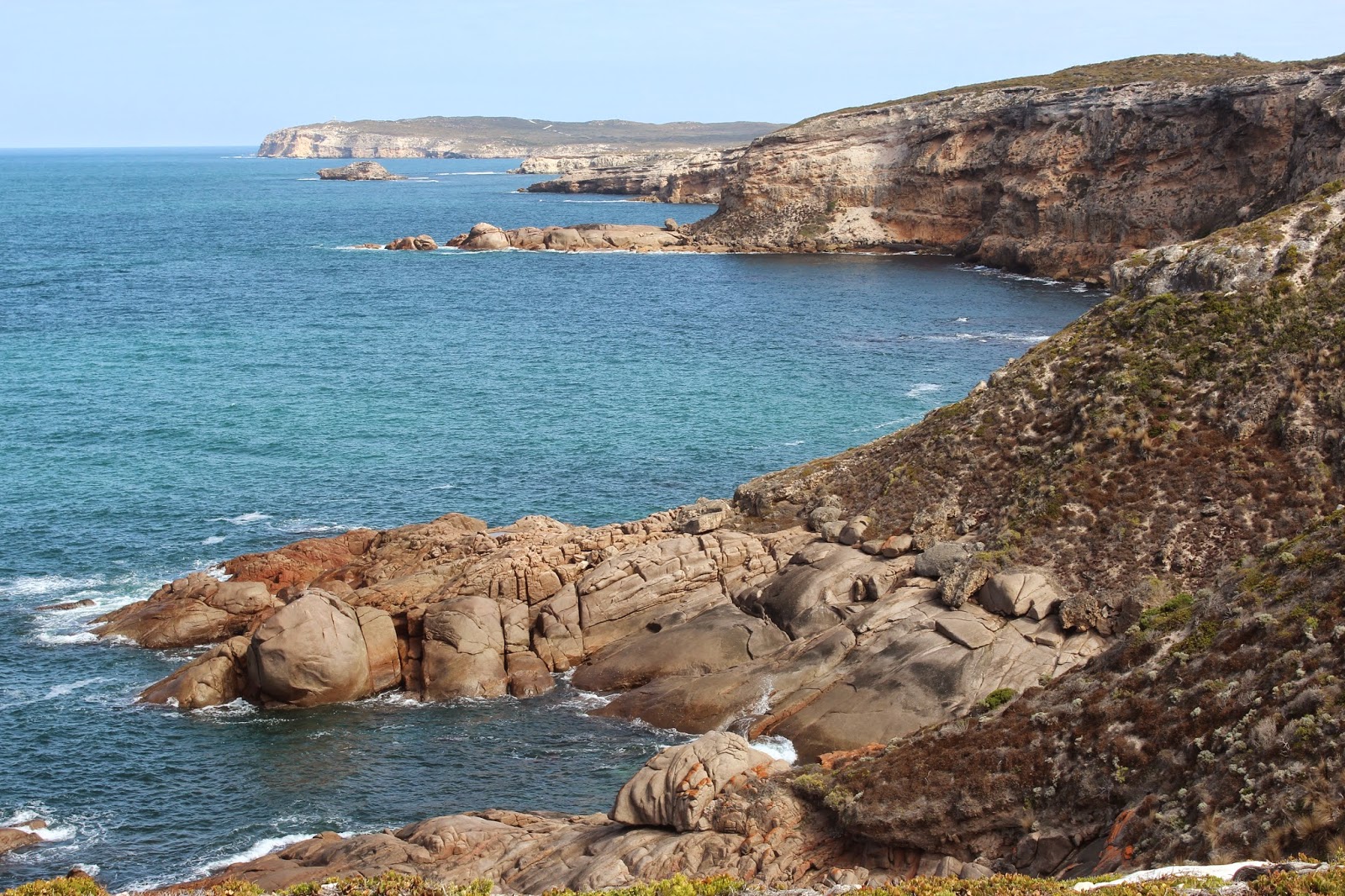 The coastal scenery is spectacular and we have done all the scenic walks. As National Parks go, this one is well worth a visit. 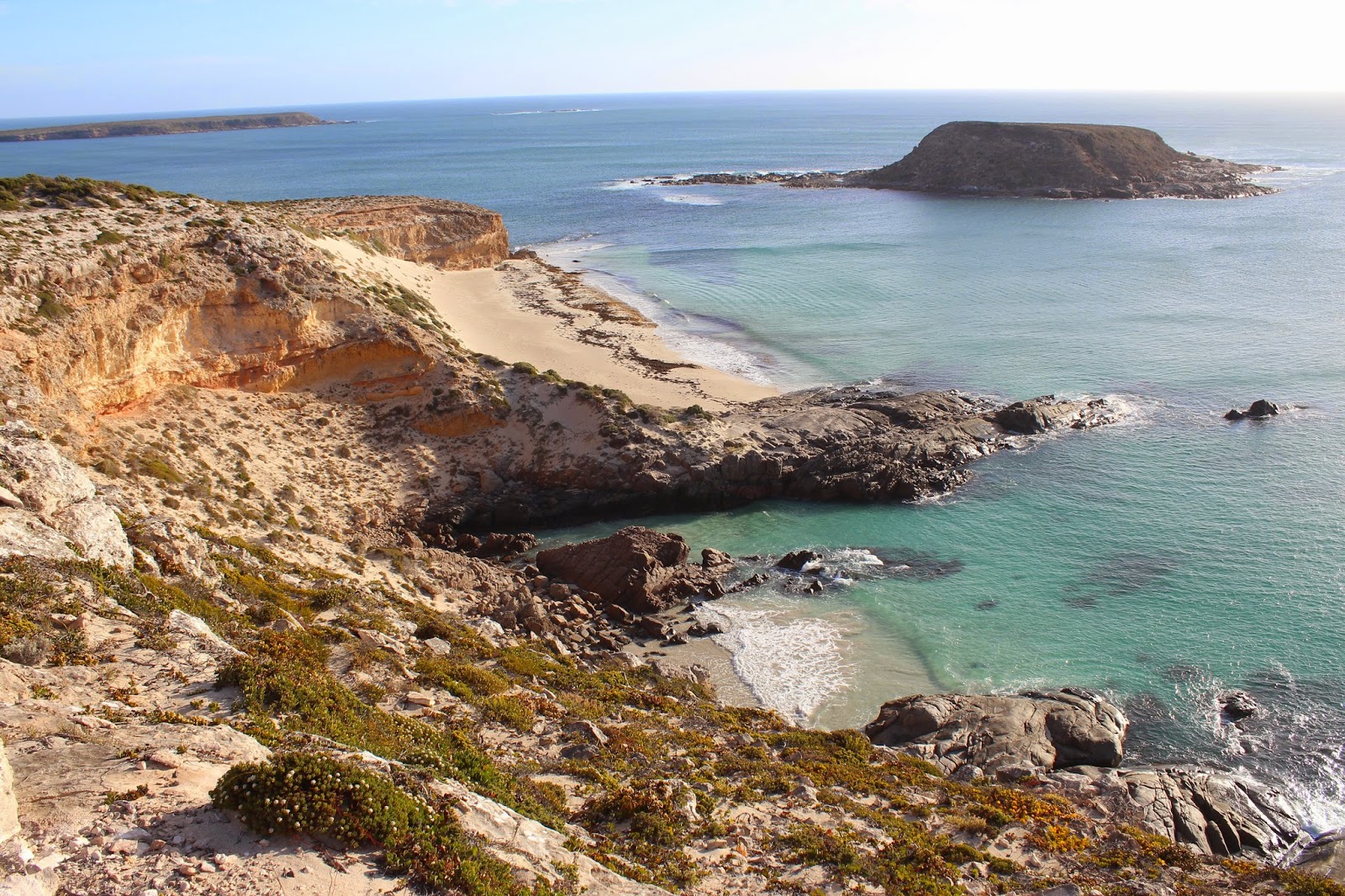 Part of the park was a gypsum mine from the late 19th century until the 1970's and it contains a lot of heritage buildings and infrastructure relating to the mining operation and plaster manufacturing plant which used to be here. One of the less exciting remnants of that era is what is described as a heritage rubbish dump perched at the top of one of the cliffs When the rubbish accumulated to an unacceptable level, it was simply pushed over the edge to the ocean below. 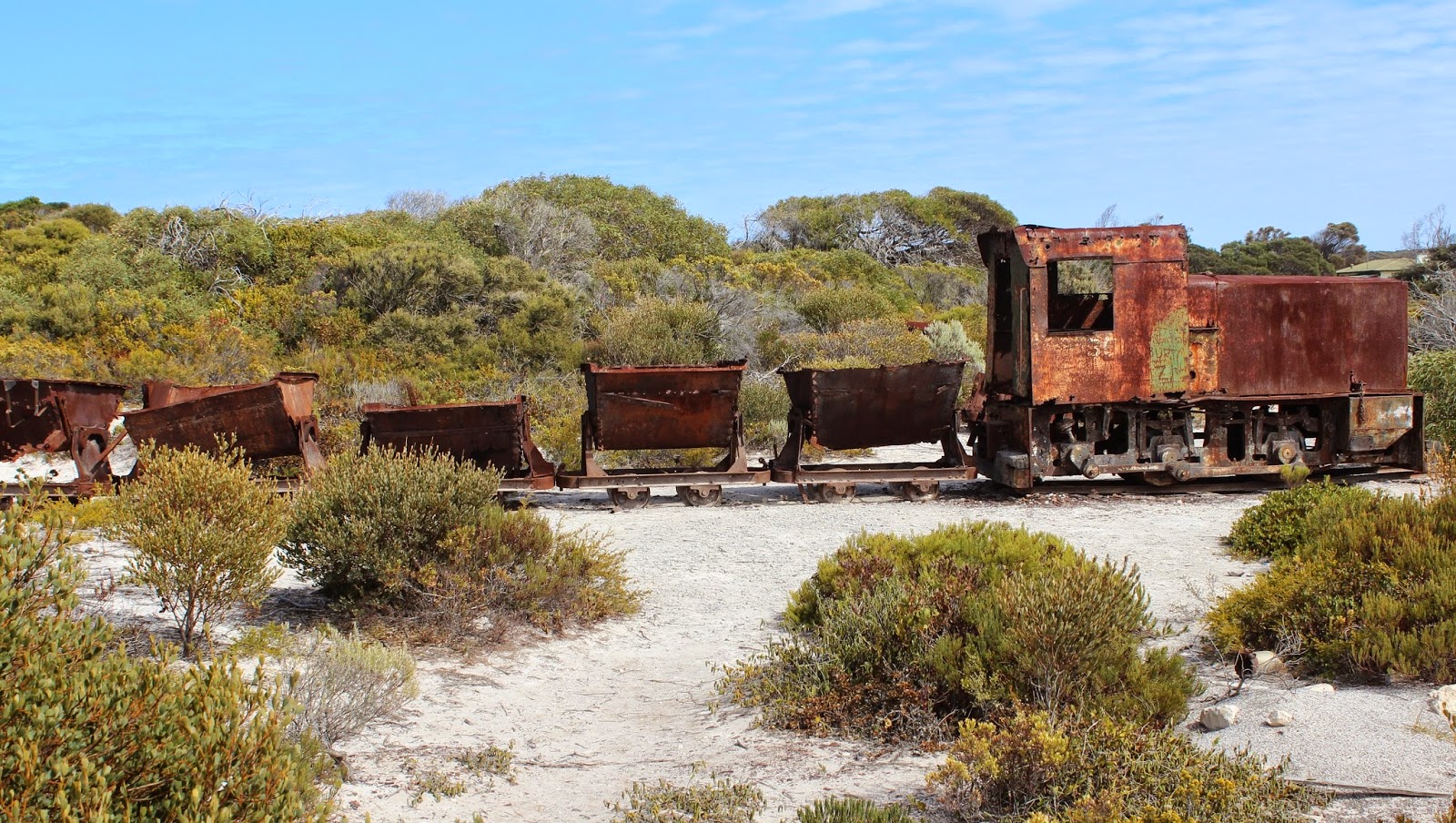 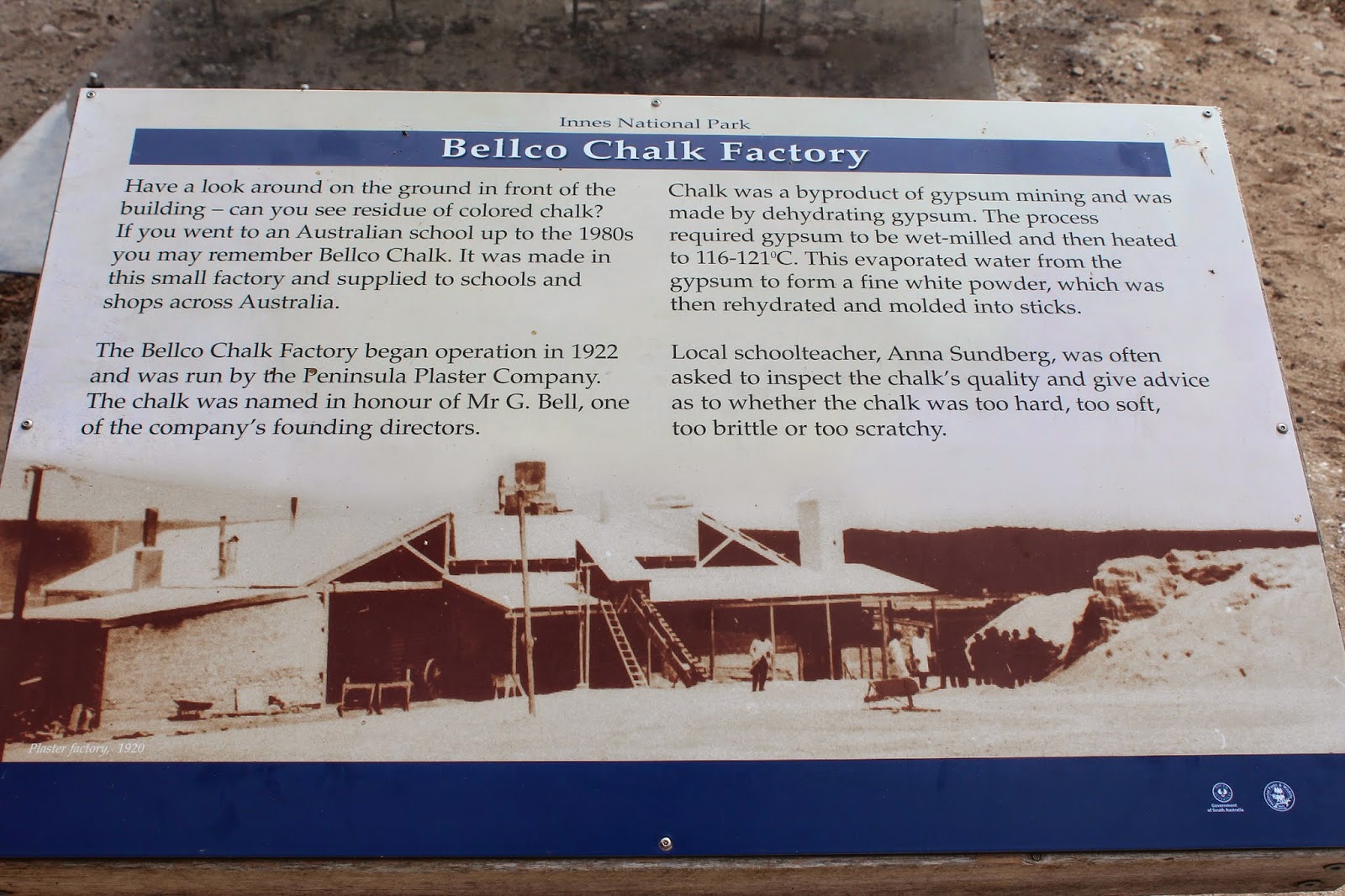 This is the southern most point of our trip. From here we start heading north again to be in Adelaide for the National Tourism Awards on Friday night after which we hightail it for home. Back to the real world. 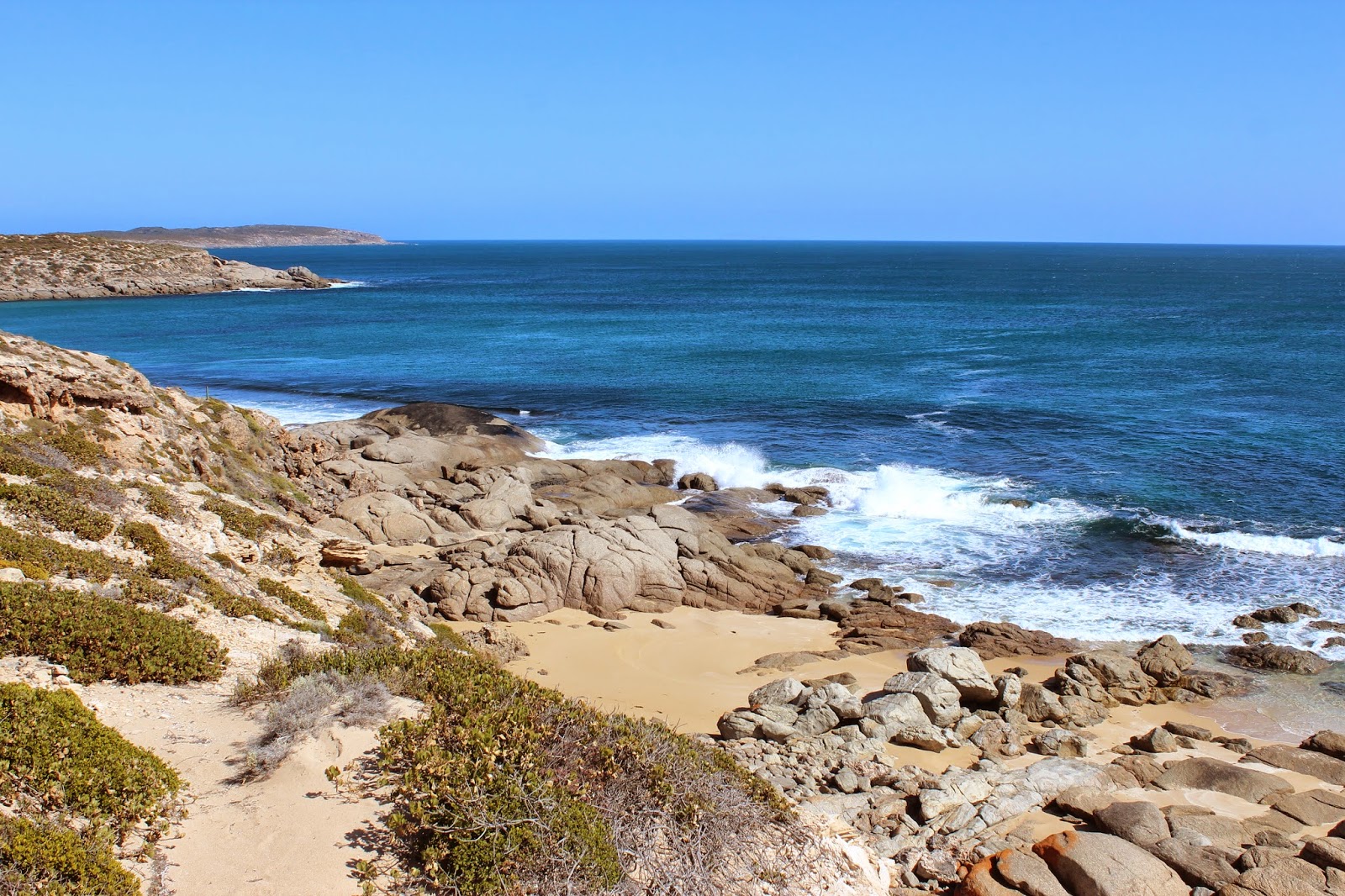 This is being posted from a very gloomy Stansbury where we are having lunch on Monday. The weather has deteriorated significantly in that it is wet, windy and the maximum temperature today is expected to be 15 degrees. Fortunately the weather over Easter was sunny and calm although cool by Qld standards.
Posted by MichaelK at 21:13 No comments: 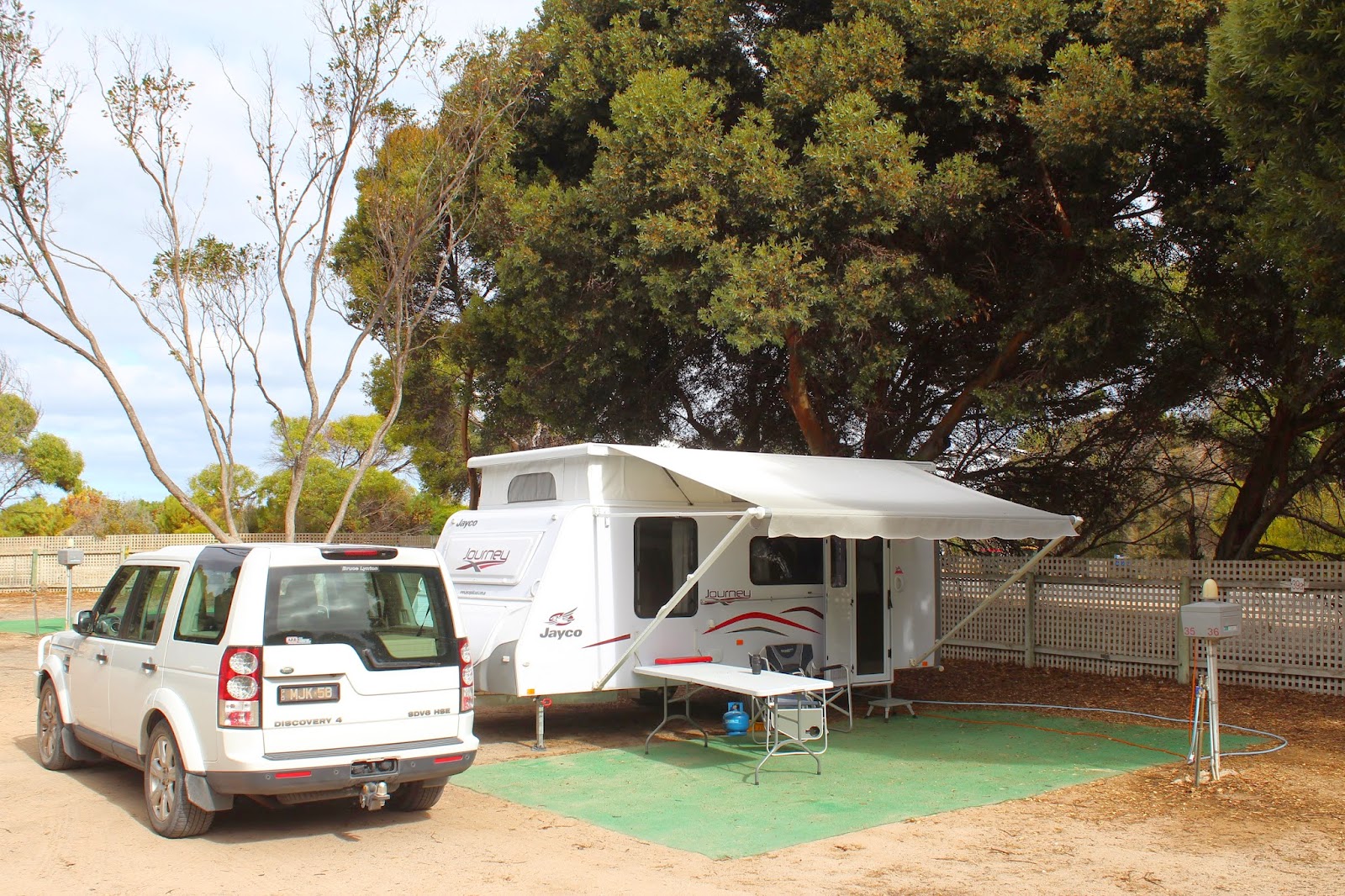 Another very quiet day today. We travelled all of 50 km from the seclusion of Berners Beach to Marion Bay where we are settled in the local caravan park which is slowly filling up for Easter.


Today was the day to do the washing, restock the larder, fill the water tank and generally prepare for the next four days in the Innes National Park. As I am typing this the wind is blowing quite strongly and conditions outside aren't that pleasant. The forecast for the next few days is for the wind to drop off a bit. Hopefully the National Park camp ground will be reasonably sheltered.


Marion Bay is yet another settlement of holiday houses, boats and tractors. Getting boats in and out of the water here doesn't look that easy. Note the accumulation of seaweed on the beach. 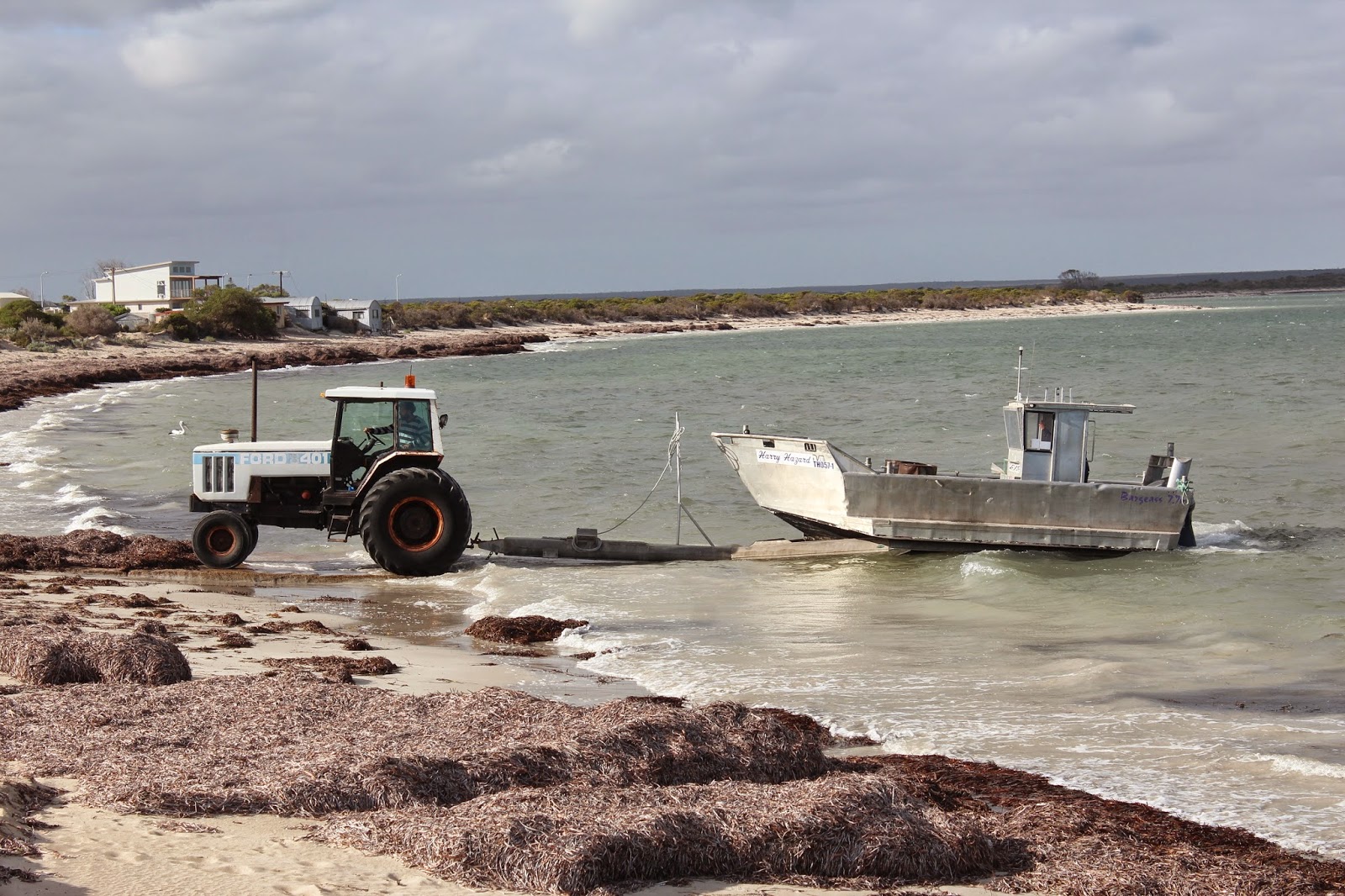 I don't know whether we will have any signal in the National Park so, if you hear nothing for the next few days, that will be the reason.


Happy Easter everybody and I hope that the Easter Bunny finds those who would like a visit from him.